Skip to content
Home»News & Events»Blog»RPG Free Form: Why is it so important for you?

RPG Free Form: Why is it so important for you? 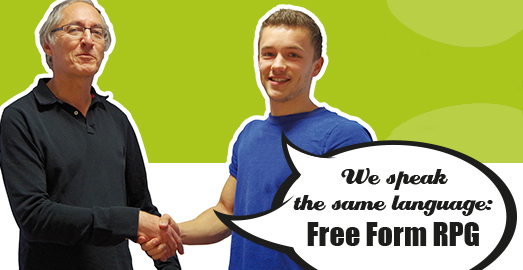 The biggest concern that IBM i companies are struggling with is finding good RPG resources.  For sure, if you look at things from only that angle, you have every chance of being very, very disappointed. The average age is above 50 and you can roughly get only one developer for the cost of two, not very exciting.

Of course, if you keep your existing code as it is, you definitely need to find a good expert with many years of experience in this really “exotic” language that has not been taught at school for several decades now.  But what if you used a “translator”?

IBM proposed to ARCAD Software in 2013 to develop such a tool for automatically converting RPG into RPG Free Form.  It has been a challenge because we wanted to make this conversion as elegant as possible and really rejuvenate the code.  In addition, we had to deal with the “GOTO” statement. In any modern language, this statement (that allows developers to jump almost anywhere in the code) no longer exists…  We had to implement many different options in the way of managing the removal of GOTOs.

This tool is available since November 2013. It can be downloaded from our website and you can try it on your own on a small set of programs.  The feedback we have had from users is really glowing. We are very proud of this result and we are continuing to work together with IBM on the different evolutions of the language in order to support the newest capabilities.

Let’s take a little step back: what was the strongest threat to the IBM i platform has become its strongest opportunity.  Contrary to the COBOL language, which still relies on the ANSI 74 standard, the RPG language is not bound to follow any international standard as it runs only on the IBM i platform.  So, IBM has been able to completely rejuvenate the language to the point that any young developer getting out from school is able to read and write in a very short period of time.  Isn’t that cool?  You don’t believe it?  Let’s try the exercise in your company.  Take a young developer (or take a trainee out of school if you don’t have one) and let him read some RPG Free Form code.  It’s always the same reaction: “this language is simpler than Java or C#”.

So now, we have on IBM i a standard language that is easy to learn and is, by the way, the most powerful as it is specifically designed for that platform.  That’s a fact.  What’s missing?  A good translation tool.  That’s ARCAD Transformer RPG.