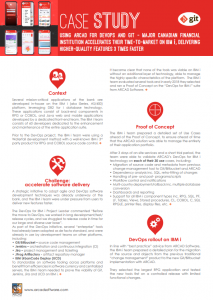 Several mission-critical applications at the bank are developed in-house on the IBM i (aka iSeries, AS/400) platform, leveraging DB2 for i database technology. These applications consist of back-end components in RPG or COBOL, and Java web and mobile applications developed by a dedicated front-end team. The IBM i team consists of 60 developers dedicated to the enhancement and maintenance of the entire application suite.   Prior to the DevOps project, they worked in long development/test/release cycles, and were under pressure from users to deliver new features faster.

The bank migrated their RPG application (comprising over 30K components) to the new DevOps toolchain, based on ARCAD and Git. ARCAD provided the seamless integration of each of the enterprise tools Git, Jenkins and Jira with the IBM i platform, including RDi. ARCAD automated the recompilation of dependent IBM i artifacts and packages up the release making the whole process easier to manage. Developers can now work on their own feature branches and develop in parallel. Already software deliveries are achieved 3 times faster than before.

With ARCAD, we now deliver new releases 3 times faster when compared with our previous toolset. We have succeeded in meeting our DevOps targets on-time and on-budget and our developers are comfortable with ARCAD’s modern tooling. We have already moved from quarterly releases to monthly and we plan to accelerate further with ever smaller and more frequent releases.